The presence of a third man is probably a rarity for most people on a date, but perhaps I’m just making a silly point there. Generally speaking, a fine leg is greatly appreciated, and a long leg would be a pretty good alternative. I’m not myself sure about short leg – let alone a square leg – but whatever floats your bat boat.

Phew! I’d rather try my luck with a packet of chips. [Those who checked this story out in the Web Shavings post, don’t go there again then abuse me for wasting your time].

Just as psychoanalysis informs other forms of psychotherapy, Brearley thinks test cricket has much to teach the shorter game. “Twenty20 is very exciting, and good things can happen in it, but it’s important to keep test cricket too. The skills derived from test cricket can underpin the Twenty20 skills. And a greater range of cricketing ability and personality is revealed through five-day cricket than it is through Twenty20. There are parallels to each of these points in the comparison between psychoanalysis and things like CBT.”

It’s a persuasive comparison, but not one that will guarantee test cricket’s survival. “Maybe it will turn out that test cricket has no long-term future,” he admits. “Certainly the ICC will have to be careful not to make it too routine. Pitches will have to be much better for the game than the recent ones in the West Indies and Chester-le-Street. But we have to persuade people that many valuable things take time. You can’t speed up the St Matthew Passion.” Brearley points to the critical drubbing that Joseph Conrad received for his novel Chance (1913), and Conrad’s own riposte, published as part of the introduction to the second edition, in which he wrote: “No doubt by selecting a certain method and taking great pains the whole story might have been written out on a cigarette paper. For that matter the whole history of mankind could be written thus if only approached with sufficient detachment. The history of men on this earth since the beginning of ages may be resumed in one phrase of infinite poignancy: They were born, they suffered, they died… But in the infinitely minute stories about men and women it is my lot on earth to narrate I am not capable of such detachment.” Psychoanalysis, Brearley says, “tells stories in similar depth, with repetitions from different points of view… These things take time, as does test cricket.”

In Prospect magazine, Edward Marriott interviews the man who went from being England’s reputedly most cerebral cricket captain, to one of the country’s leading psychoanalysts: Mike Brearley.

Want to get your kid playing the straight drive to perfection? Send him here.

LTTE adherents attack Sri Lankans in London after the final.

So far eight such incidents had been reported and 16 youths were injured. Two of them had serious injuries and were taken to the nearby hospital. They were later discharged after treatment. All these pre planned attacks took place while Police were present and so far no proper action has been taken to catch the culprits. However when  Police officers were  about the attacks, they have replied to the victims that they do not have enough manpower (police officers) to take effective action..

Later the victims of three separate incidents have reported to the Paddington Green Police Station. Almost all the victims were British Sri Lankans mainly Sinhalese and one British Tamil received minor bruises from the attacks. There were many such incidents according to the information getting but unreported. Few vehicles belongs to Sri Lankans parked closer by were damaged too.

The ICC’s general manager for cricket Dave Richardson has made a suggestion that will set the cat firmly amongst the pigeons.

“It’s an important point that Test cricket should be played against teams that are at least competitive with each other,” Richardson told Cricinfo. “Ideally, you want to have the top teams playing against each other, and then teams of lesser standing playing against each other, maybe in a second division or a lesser competition such as the Intercontinental Cup. I think that’s the challenge for the ICC, that it can create some sort of context for Test cricket both at the higher level and at levels below that.”

Sounds just fine, as far as it goes: A two-tier Test system with promotions and relegations will provide context to the contests; by way of side benefits, it will avoid the farcical situation of teams and players inflating their records and averages with regular fixtures against the weaker sides. You want more pros? Once you have a tiered Test system, you can move towards organizing a world Test championship — fewer teams will permit the officials to draw up a home-and-away cycle that resolves the Test crown every two years, three tops.

If the first of your two tiers comprise the 10 nations currently playing Test cricket and the second comprises the best of the associate nations, then the purpose is defeated and you are right back where you started from.

If, however, you attempt to divide the existing Test nations into two-tiers, stand by for uproar. The teams in the second tier will claim, with considerable justification, that by creating a situation where they cannot play the top teams, the ICC has dramatically curtailed their ability to monetize the game, and that without the money brought in by high profile teams, cricket in their respective countries will die an unnatural death.

An option that has been discussed in the past and likely will be again is the one where the top tier nations contribute part of their take into an ICC fund which will be used to beef up the coffers of the bottom tier. Guess who will object to that and why? [It’s like the time I used to be a steward, and got assigned permanently to the night shift. The hotel I worked in — Chola Sheraton, in Madras — brought in this insane system that you had to dump the tips you got in a common basket, and everyone shared equally once a week. The problem? The night shift is considerably more demanding, and pulls more than double the tips, of the day shift; why the devil would I want to do all the hard work, and share with those who have it easier?]

The ICC has been working over the last year towards lending context and meaning to Test cricket to make it more competitive and attractive for spectators. Last year, officials had discussed the possibility of holding a Test championship where the TV revenue flows into a common pool. But the idea was shot down primarily by India and England, who would end up contributing as bulk of that money. The other significant idea to be discussed is for countries to designate Tests between top cricketing nations as full-fledged five-Test “icon series”. India and England have already signed one such agreement.

This tier system has all the earmarks of a good idea that will never get implemented, at least not in a democratic system where each team has a vote in the ICC council. 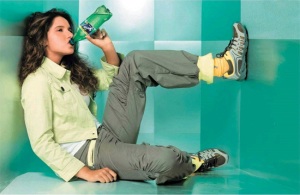 1. Indian tennis star Sania Mirza is among the millions in this country living below the poverty line. [Hat tip: Hemant Puthli]

2. An old joke went thus: during a class on global over-population, the professor pointed out that somewhere in China, a woman was giving birth once every two seconds. So what are we going to do about it, he asked.

‘Find her and stop her,’ suggested the class smartass.

What won’t work in reproduction works just fine in crime, though: the arrest of one family has bought crime rates in a British county to a 20-year low.

6. Putting the ‘lay’ in Lay’s, a woman accepts a bag of chips in exchange for sex, which incidentally tells you how bad the recession is. [Statutary warning: Don’t try this at home]