A mail landed up in my inbox a few weeks ago, asking if the mailer — recently arrived in India and already converted into a full-fledged cricket fan — could do a guest post on this blog on how he got hooked on the game. Here’s his story:

To watch Trinidad and Tobago bite the dust was a sad, sad moment during my stay in India and a bitter moment in my new life as a cricket fan. 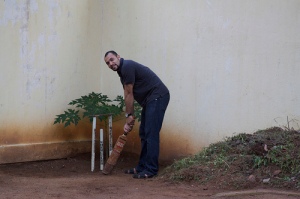 Chikodi at bat -- and I totally love those leafy bails

A few months ago I hardly knew what cricket was, but on that Friday night I felt a bond with tens of millions of Indian cricket fans in support of an unlikely cast of underdogs just forty overs away from worldwide stardom. However, as the tenth wicket fell, I was caught up in a swell of collective grief that I’m sure blankets much of the cricket world, save perhaps Australia.

In a noisy and rock & roll  bar in Bangalore’s Koramangala neighborhood, I patiently explained to a fellow American the rules and scoring system  of cricket as T&T bowled and New South Wales piled on the runs. How had I learned so much about cricket, and so fast, my friend wondered?

It’s true — Americans know next to nothing about cricket, but after three months in India I consider myself a bona fide nut, and few people I know would be willing to take the other side of that argument.

Living for the last four years in New York City, I’ve watched from a distance as cricketers from the sub-continent and the West Indies engaged in the world’s second most popular sport, either on the campus of The City University of New York, or in a few parks in the Bronx and Brooklyn. I was never curious to join, and I wasn’t terribly interested in watching either.

My first weekend back in Bangalore, I played gully cricket in a friend’s backyard and the experience was all I needed to become hooked. To the amazement of my Indian friends, I quickly showed a knack for cricket. Because I grew up playing little league baseball, the eye/hand coordination needed to bat was the same, and bowling was just a full-bodied version of pitching. Next time I play, I hope we go to an open field somewhere I can crush a few balls without breaking any windows.

What captivates me about cricket is the athleticism, the skill level involved and, of course, the razzle dazzle off the field. Cricketers are much more athletic than baseball players; they are expected to bat, bowl and field balls with their bare hands. While a 20 over match may end in just three hours, test cricket is a trial of both physical and mental endurance unlike any other sporting contest I know.

It would seem cricket has even less chance of catching on in the States than soccer, but if Americans knew what huge celebrities cricketers are in India and how much they are paid, they might rethink their sports-related career ambitions.

In America, the legends of basketball, hockey, football and baseball have to share the spotlight with 3,000 other pro athletes, while professional cricketers in India are part of an ultra-exclusive club with just a few hundred living members. The media follows their every move: Harbhajan Singh’s latest brawl with the police commands as much attention as the election to the state legislature.

There’s also the matter of national pride, which can be neatly summed up in India’s intense cricket rivalry with neighboring Pakistan. If America’s Confederate and Union armies had baseball teams, their matchup would be the closest analog to the meeting between Indian and Pakistani cricket teams, two of the sport’s fiercest competitors who engage in periodic contests eagerly awaited by tens if not hundreds of millions.

The mood inside the stadium was electric throughout, with the crowds rarely going silent even when two non-Indian teams were contesting. Only America’s most storied sports franchises, such as Duke basketball or University of Michigan football, can come close to that kind of atmosphere.

Having also lived in Brazil, I think it is possible to argue that Indians are even more single-minded in their devotion to cricket than Brazilians are into soccer — the jury is still out.

As a full-fledged cricket nut, I felt the loss of T&T on multiple levels. First, T&T was not a team anyone considered for the championship game until they thrashed the Diamond Eagles on a Sunday, then trampled the Cape Cobras the following Thursday in a thrilling 168 run chase. Although T&T had already beaten New South Wales, their team was an underdog in the tournament — and everyone loves to root for the little guy.

Secondly, nearly half the starting 11 for T&T are of Indian origin, such as team captain Daren Ganga, wicket keeper Dinesh Ramdin and slugger and bowler Adrian Barath. The swagger and colourful styles of the team made them endlessly entertaining to watch.

Now that the CLT20 tournament has drawn to a close, I’ll have to content myself with reruns of classic matches and the prospect of IPL3. Let’s hope it can live up to all the hype.

From his mail, I understand that Chikodi grew up in Seattle, Washington playing soccer for his father’s club team. His first exposure to cricket came in the movie ‘Teenage Mutant Ninja Turtles.’ Today his favorite cricketers are Dilshan, Harbarjan Singh and Dwayne Bravo.

He completed his MS from the Columbia University Graduate School of Journalism this May before moving to Bangalore; earlier, he has worked at Google’s world headquarters in California and at MTV in New York City.

Chikodi writes about travel and technology in developing economies on his blog www.techtrotter.org where you will find a post on how India turned him into a sports fan; he also posts on cricket and other interests on Twitter: @chikodi

On Cricinfo Gopal Rangachary talks of how he became a cricket fan. Strikes me, though we are all fans of the game, each of us acquired our fanboy status in different ways. Chikodi and Gopal have their stories; what’s yours?

Unrelated, I’m done with work for the day/week; tomorrow has some running around scheduled which, hopefully, will end in time for me to get to watch the game. Random thoughts, if any occur, on Twitter. And back here Monday.

Production day here at India Abroad — and all quiet on the cricket front as well. So — off this thing for the most part; much later in my evening, will swing by with any interesting reading material I happen to stumble on in the interim. Oh and as always, random thoughts on Twitter.